I recently acquired an iRobot vacuum cleaner to substitute me in house-cleaning. It buys me time to write articles here.

While I may be a late adopter in practice, automata creeps more and more into my prattle on airline operations. That seems to spur from human ingenuity finding applications for robotic process automation away from obvious OCC work, the most recent example being human resources.

Robots are already searching for candidates and interviewing applicants with a recorded video for the human to review. 93% of employees would take direct managerial commands from a non-human manager. So, there’s no obvious reason cost reduction will not further their introduction in human resource management, and more importantly, why the humans shouldn’t already figure out what to skills to specialise in once the androids are a daily part of it.

What’s the robot going to be doing in people supervision in the next 5-6 years? What it’s good at: collecting, sorting, and storing data. It will seek the attributes a human decision maker needs (flight hours, valid ratings, medical validity and so on), reducing the candidate to a variable. Considering existing applications in maintenance, it would then not be far-fetched to suggest that by 2025 these same collectors will not only describe who’s applying but also suggest what to do with them (prescriptive analytics) or contact them again based on a forecast of fulfilling requirements at a future date (predictive analysis).

[Perhaps, you will be able to hire one to build your CV? If recruiter robots seek a set of parameters, there’s no reason why a counterpart automated service can’t generate data in a format acceptable to them. A simple chat bot can ask you questions to create a document that you can submit, so you don’t have to (if anyone monetizes this, please acknowledge that you heard it here first!)]

Furthermore, if an HR specialist spends 65% of their time on automatable rule-based processing, they will have to earn their worth otherwise. The AI will still need supervision, so let’s assume only half of the human’s time will be freed up, likely in the application of “soft skills“. 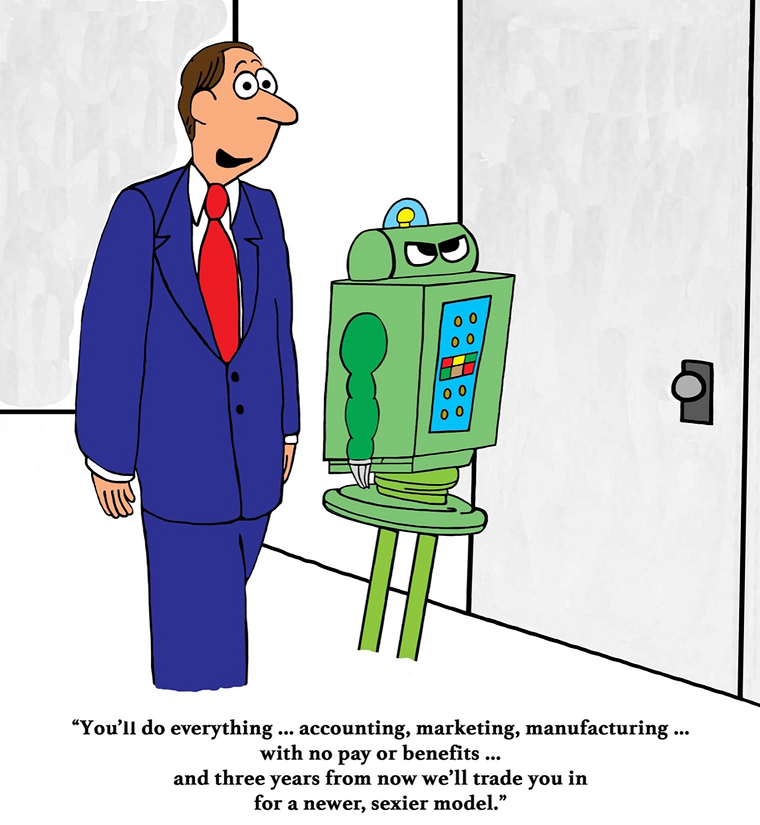 Android lack of these is the butt of many sci-fi jokes (see StarTrek’s Data for more) but witticisms haven’t generated corporate profit yet. HR processes have and humans will need to continue creating employee journey maps. In the pre-employment phase, no robot can reach out to schools and convince pupils that the pilot job is cool. Interviews (“Know me, like me, trust me“) will likely still involve hominid interaction and a “high touch” to assist the high tech.

Later on, during the course of one’s career, management will likely be a mixed bag of algorithm and meat intellect but conflict resolution and motivation talks should remain a spur of a mortal’s emotional intelligence. New roles for employees may be suggested by digital assistant analysis but involving a pilot in tasks not fitting their primary occupation will still need creativity that machines have not demonstrated.

Perhaps some of us will be involved in automating ourselves out of a job and into retirement. At least until now, this path has not been a zero-sum game, leaving undiscovered opportunities to claim.

I was talking to an acquaintance about an IT system installation project and she identified a most important element of the process being no one getting blamed for delays. As system implementations go, this one had taken longer than planned and at a much higher cost. Did the consultants take the “no blame” aviation concept and adopt it into an IT implementation because of the sector in question?

It seems they kept the bigger picture (having a tool instead of not). “Blaming…is more than just a process of allocating fault. It is often a …[means]…of shaming others and searching for something wrong with them…[providing]…an early and artificial solution to a complex problem….a simplistic view of a complex reality: I know what the problem is, and you’re it.”

The “no blame” concept did originate from high reliability organizations where a high survival rate is essential for the company’s existence and one of which was the subject of our discussion. However, it is not easy to implement even in most such environments – just review search results for “implementing a no-blame culture in medical services.”

One indirect means to remove blame is to replace humans with automation – it’s hard to argue with an algorithm when it does not have instructions how to answer. As aviation-centered high reliability organisations demonstrate, robotisation means results:

Removing humans does not have to be a seeming “silver bullet” though. The American engineer W. Edwards Deming demonstrates that 95% of variation in the performance of a system (organization) is caused by processes in it and only 5% occurs because of its participating actors. As autopilots and autothrottles show, for the time being robots can replace some mundane tasks: “RPA works best when application interfaces are static, processes don’t change, and data formats also remain stable – a combination that is increasingly rare.” Actually, about one in twelve of the implementation managers are redesigning processes to be managed by the same robots (I had another discussion on robotic process automation with another acquaintance and it seems it’s only appropriate in 30 to 40% of cases).

While “no blame” is not frequently used even during the IT implementations that lowered the fatality rate, the fashionable “accountability” alternative concept has emerged: “viewing…[errors and shortfalls]…as opportunities for learning and growth.” And one first area where this can be applied is in programming the robots (just ask any engineer in charge of software loadable parts). There are still ways to find culprit ex machina:

Will using robots be the ultimate no-blame implementation because it will lead to a 0% fatality rate?

Like most people, I think the ubiquitous robot future is exaggerated. While headlines about machines going to take over our lives are everywhere, the associated artificial intelligence challenges abound and history suggests the economic party always continues with the machines going hand-in-hand with labourers anyway.

But, for the sake of a hype’s devil’s advocate, if you were leading a flight operations department in a reasonably-sized airline (not your uncle Tom’s Air Taxi with a PC-12 but an enterprise where 20+ aircraft can form an actual line in the air), where would you start to replace humans? After all, your basic job is maintained adherence to safety standards and optimisation of processes (and a potential 30% return on investment within a year): the soulless, salary-free, 24 hour-a-day working product of robotic process automation, once set on “repeat”, never stops for a bathroom break. Assuming a constant rate of scientific and engineering evolutions, you’d focus on standardised, high-volume, low time-consumption task and in 10 years we’ll have:

On a side note, that means that, save for maintenance downtime, airspace congestion, and airport regulations, operational expansion would become considerably cheaper (I’d estimate 27% in labour cost reduction of the average 34% airline expense with a corresponding direct operational cost (fuel, depreciation) increase).

So, what’s an honest flight operations worker to do in 10 years? The robot may not have a plan but you do:

Step 1: list your job’s functions in great detail, from the mundane (“create weekly punctuality chart”) to the highly complex “negotiate new ground-handling KPIs based on repeated delays due to their statistically-substantiated understaffing policy”.

Step 2: Look for high-volume highly standardised low time-consuming actions to figure out what can be automated initially. I’m not referring to reading e-mail but e.g. approving reimbursement claims, driving a GPU to an airplane – same process day in and day out and therefore soon to be performed by a being that does not tire or require pay. Cross these out.

Step 3: The entries without a line through them show your upper hand.

(Step 4: Assess if your manager and his/her manager is a risk taker since this outsourcing will take some entrepreneurial initiative to start).

I can start: can a robot write this blog? Probably not. It can seek examples of safety improvements in other industries and suggest other new information while I sleep (compiling information lists) but to apply concepts such as RPA to flight operations requires me. The recipient (could it be an automated posts crawler?) should not see the difference but hopefully they will have enough time to create something of their own based on my conjectures (that’s why I look forward to your comments below!).

All this panic seems to me misses another point: the future may not be AI-based but IA-focused. History suggests the machines will augment your intelligence in order to free your time and liberate cash to e.g. implement customer service in-flight initiatives (that is what emotionally deprived sentinels can’t do). So, if the robots could allow you to create your own job of the future what would your Kraftwerk be? Start drafting it now and get background preparations ready (i.e. study for it) because they’re already here.